When it's hot, it's fire puzzle!

This puzzle is the first of the series of "element" puzzles (fire, water, earth, air) designed by Steve Miller, who drives also an explosives company.

This puzzle comes with a beautiful box and some clues that need to be solved first.
Does it remind you something? the box...the clues....


It should be, either you have the Isis puzzles or have read my review about them.

The clues are very hard. I must admit that it annoyed me a lot, I did not have fun with them. You can spend hours of frustration on solving the clues. But this can be also seen as a puzzle, even if I prefer solving mechanical puzzles rather than cryptic puzzles... 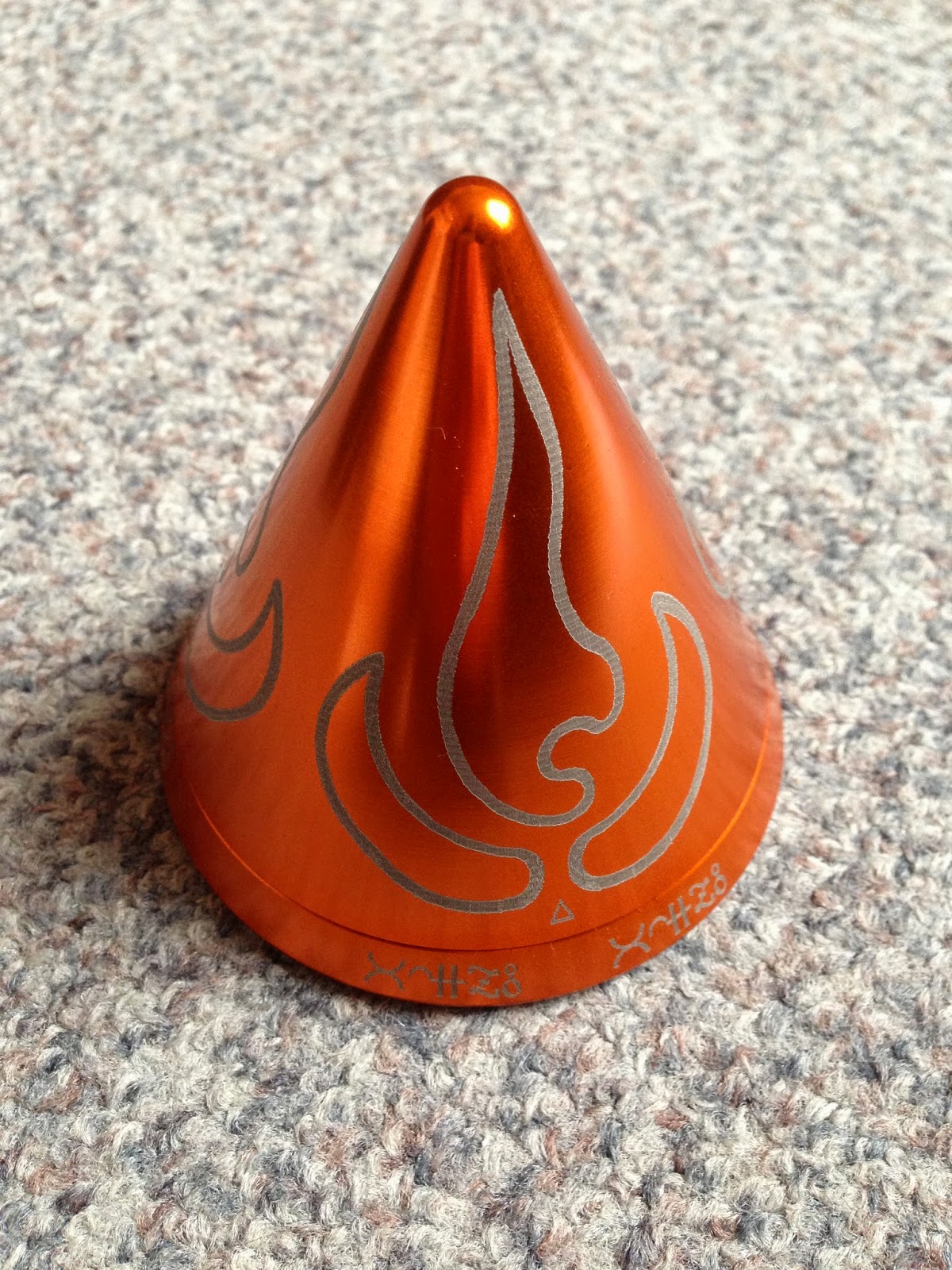 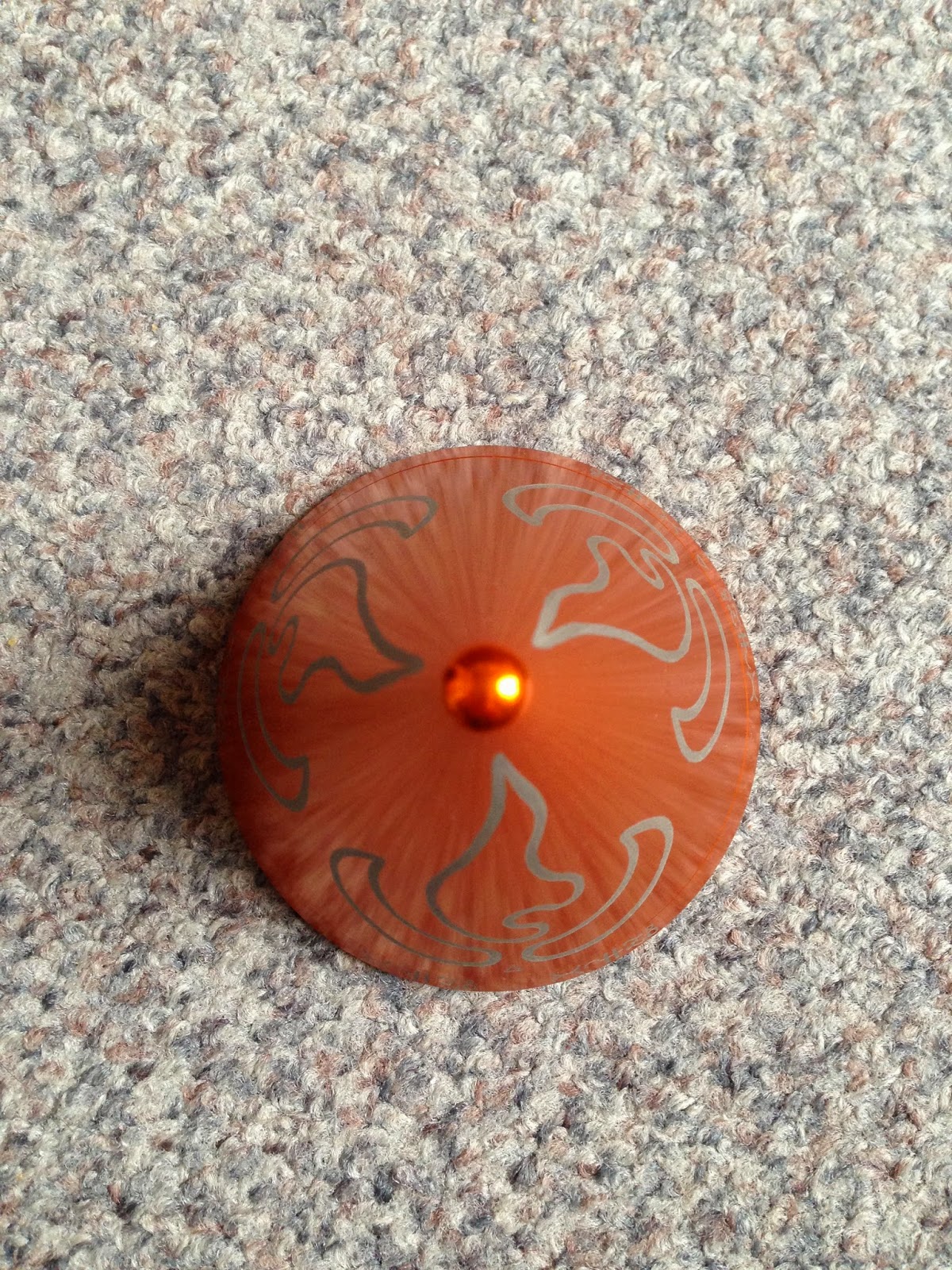 I regret that this principle of clues is a mere copy of the Isis puzzles, that is not really new nor original.
Perhaps it can be explained (in part) because the designer of this puzzle designed also some puzzles for SonicGame company (the Isis puzzles), thus he took the same ideas.

Anyway, the design of the puzzles is very good and the quality superb!
It is heavy, so take care!
The thing that I like less is the plastic feet of the puzzle that can slip away from the base because they are just glued...

Some people solved it without the clues, some needed the clues. I think the clues are useful, but you have to interpret them, and this is not easy. You need to think twice, three times or more about the meaning of each word.

The puzzle does not give much clue, so you rotate the cone and...you're stucked...Pretty strange...
It seems that there is kind of maze inside...

After understanding a bit more the clues, then you know how to navigate and you can repeatedly solve the puzzle and have more fun than frustration :-)

Remember: there are more than just opening the puzzle...I cannot tell too much because it would spoil you the surprise.

To conclude, this is a good puzzle, especially if you're a metal lover. The price is not cheap but you will have hours of puzzling!
If enough puzzles are sold, the next puzzle in the pyro puzzles series will be produced.
I really hope Steve will do his best to release the next puzzle(s)!

HERE you can buy yours. Enjoy!

You like puzzles? Yes, I am sure about that!!
You like books also?? Well, then you're ready for puzzling books !!! :-) 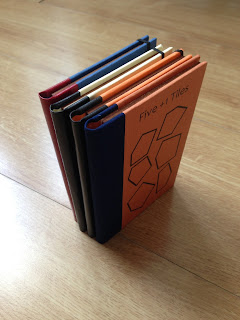 These books are laser-cutted by Péter Gal and are based on many kind of puzzles, mostly packing puzzles (goal is to fit all the pieces in a tray) which are "pretty" difficult, you're warned!
Many of them are based on ideas from S.Coffin for example, so known designers and thus nice puzzles!

In each puzzle you find the pieces on the right side and on the left side there is a sheet of paper (in one side: the goal, in the other: the solution)

I fond these puzzles really nice and enjoyable and also practical: you can easily store them and when aligned the shade of colors is nice :-)

As the pieces are laser-cuted, the fit is precise and excellent, thus it can be tricky to pack some pieces...

I put below some nice book puzzles:

This one is very very difficult... 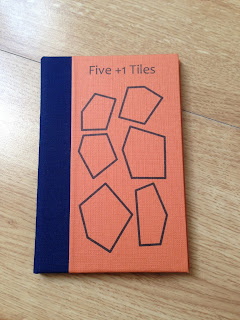 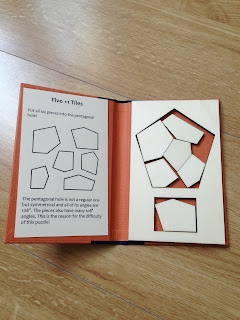 For some puzzles you are given pieces and 2 different (or more) shapes to fill in with these pieces. The shapes have to be filled in completely, so no big space between pieces!
These kind of puzzles are very handsome: 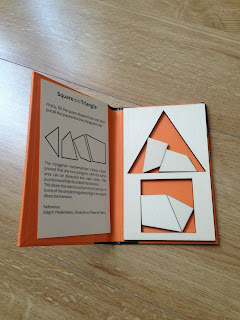 Some puzzles have the same pieces but not the same tray to be filled in, thus you need to orientate the pieces in different way.
That's really funny to see that for the same number of pieces you can fill a smaller tray...You will have to think twice before putting the pieces ;-) 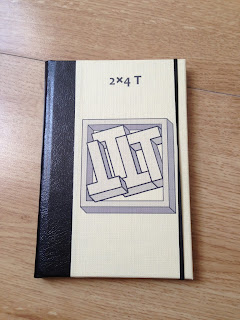 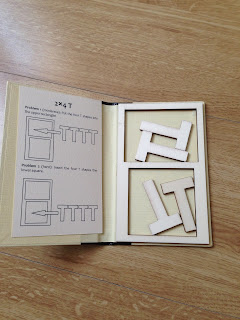 Do you have some? If so, which are your favourite ones?

If you need to contact Peter, let me know unless perhaps he puts his email address in the comments, who knows.

In any case if you cant to see more of his puzzles, you can have a look HERE.


Posted on by Az No comments:

This bottle puzzle is another puzzle from the Dutch designer Wil Strijbos. This one is composed of a lock attached to a metal chain. Keys are provided but it's difficult to use them as you can see from the pictures below. The funny thing is that this puzzle looks like an impossible bottle, but I assure you that it is solvable..with tears, blood and sweat of course... 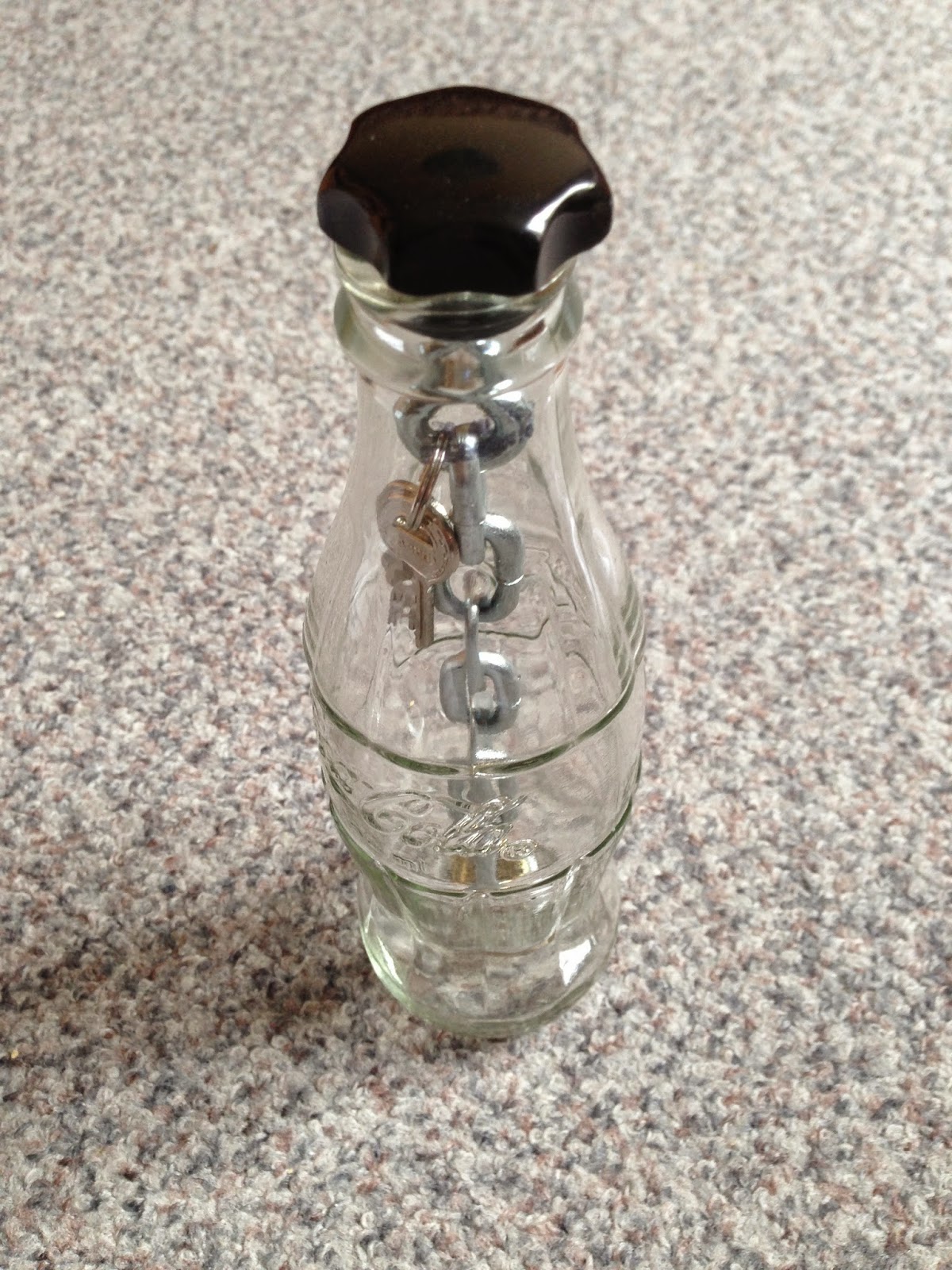 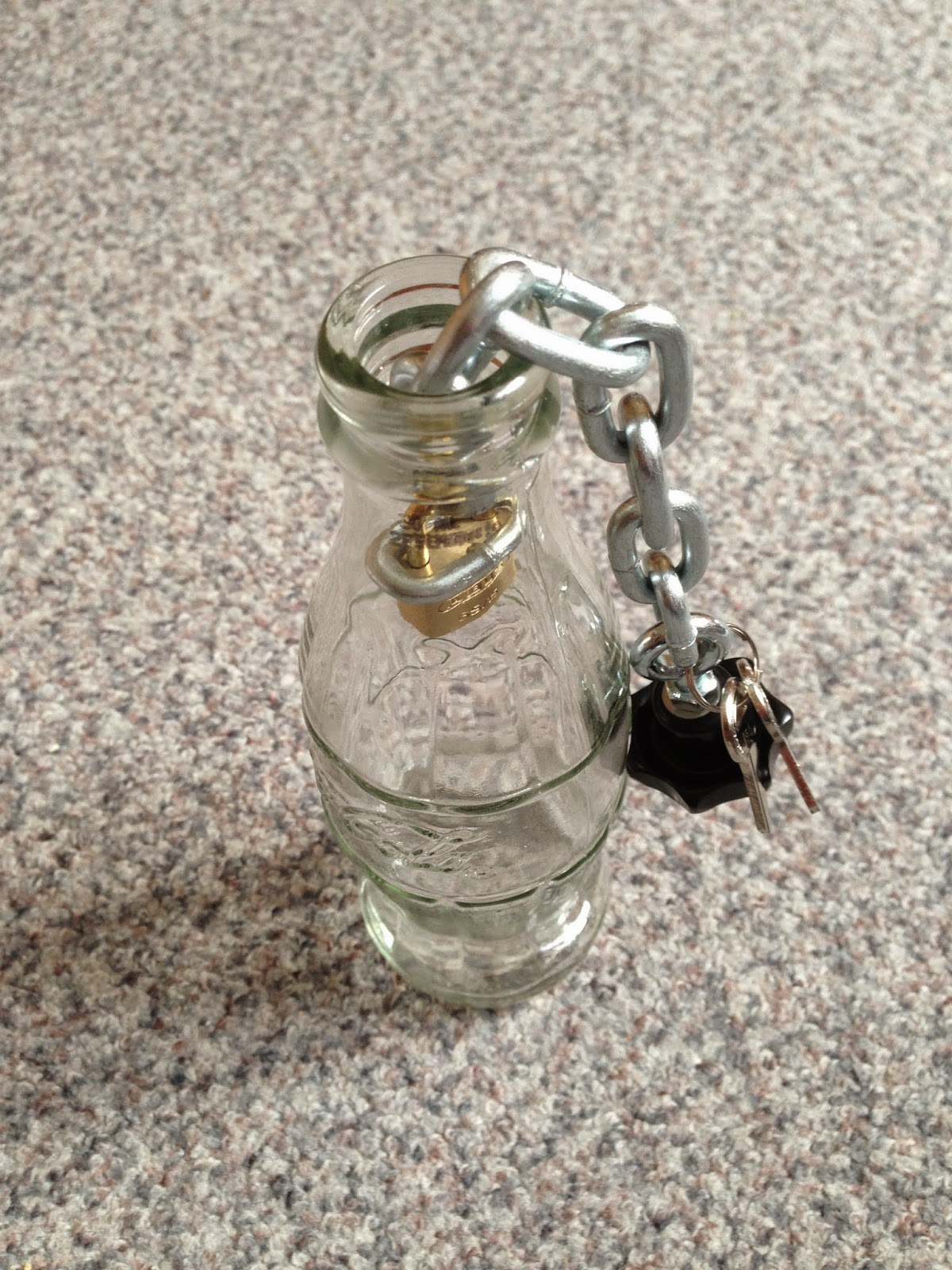 You need to find out how to take the lock out of the bottle and the small metal piece above the lock.
Again, it's hard...
Even if external tool are officialy not useful, they are more than welcome because the official solution is very very fetched and you will likely not use it (I did not) either because you did "wrong" things or because it would have never happened in your mind to use it.
But you and me don't know what's happening in the mind of puzzle designers when they're designing their puzzles :-)
So I used an external tool to open it, it is much easier. But it seems that you can open it just using all what is provided to you. So keep everything that comes with the bottle when it arrives if you want to use the official solution...

For this puzzle you will need quite an amount of dexterity and even more when you will reassemble the puzzle (for this, don't be a fool, come on, use external tools^^!!).

An unusual bottle puzzle that will fit well in your collection I think.
But this is not my favourite bottle puzzle and I was a bit disappointed by the "official" solution that I don't really like!
And you, what do you think about it? Leave your comments :-)

Posted on by Az 10 comments:

This review is about 2 coins puzzles designed by Mineyuki Uyematsu with original shape and pretty strange name. The goal of both puzzles is to free the chinese coin.
The material used are layers of plastic screwed together by 3 screws. It seems that we can unscrew the screws, I did not, but if anyone did, please let me know.

The first one is called Hard-Boiled Coin 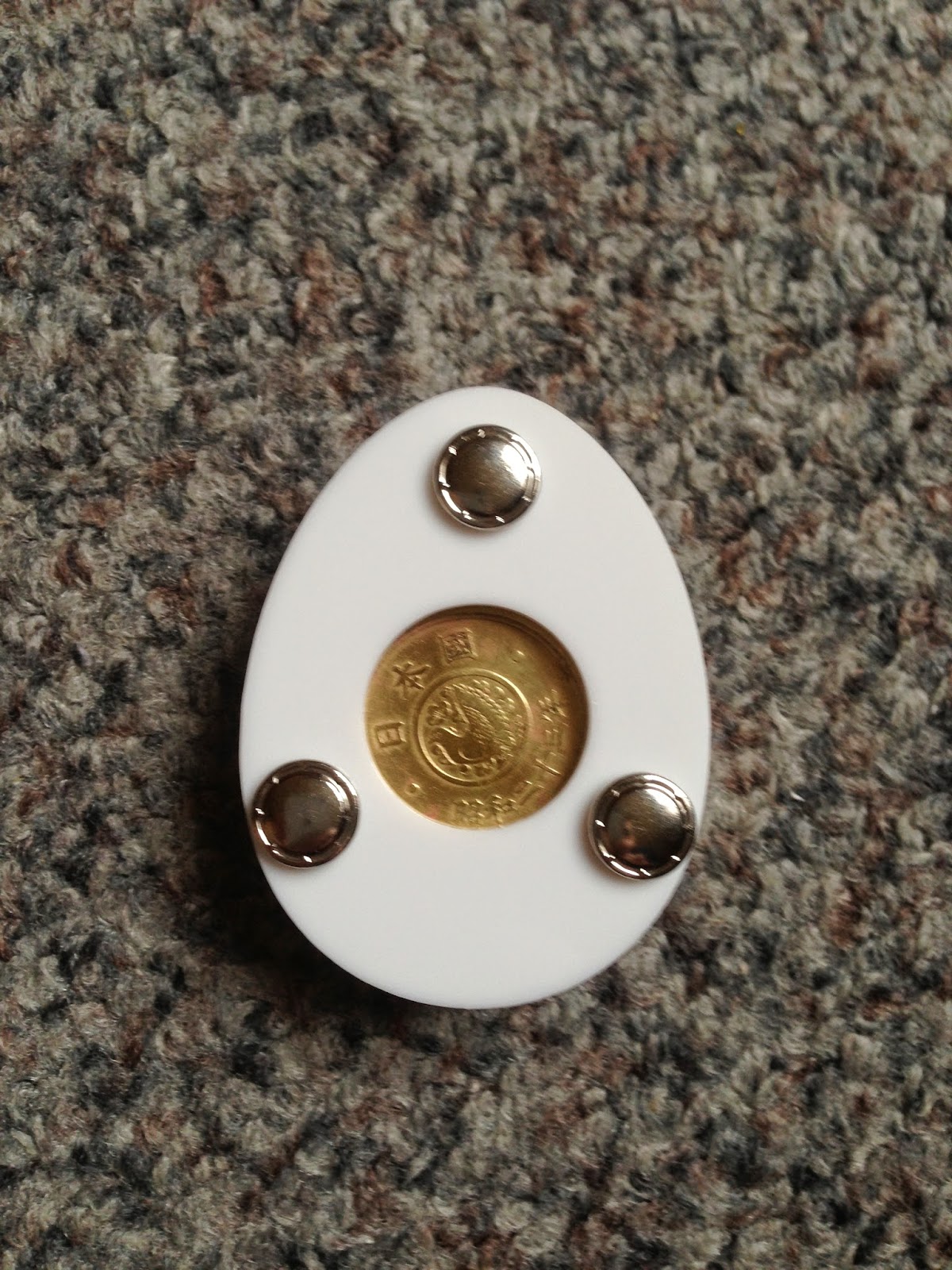 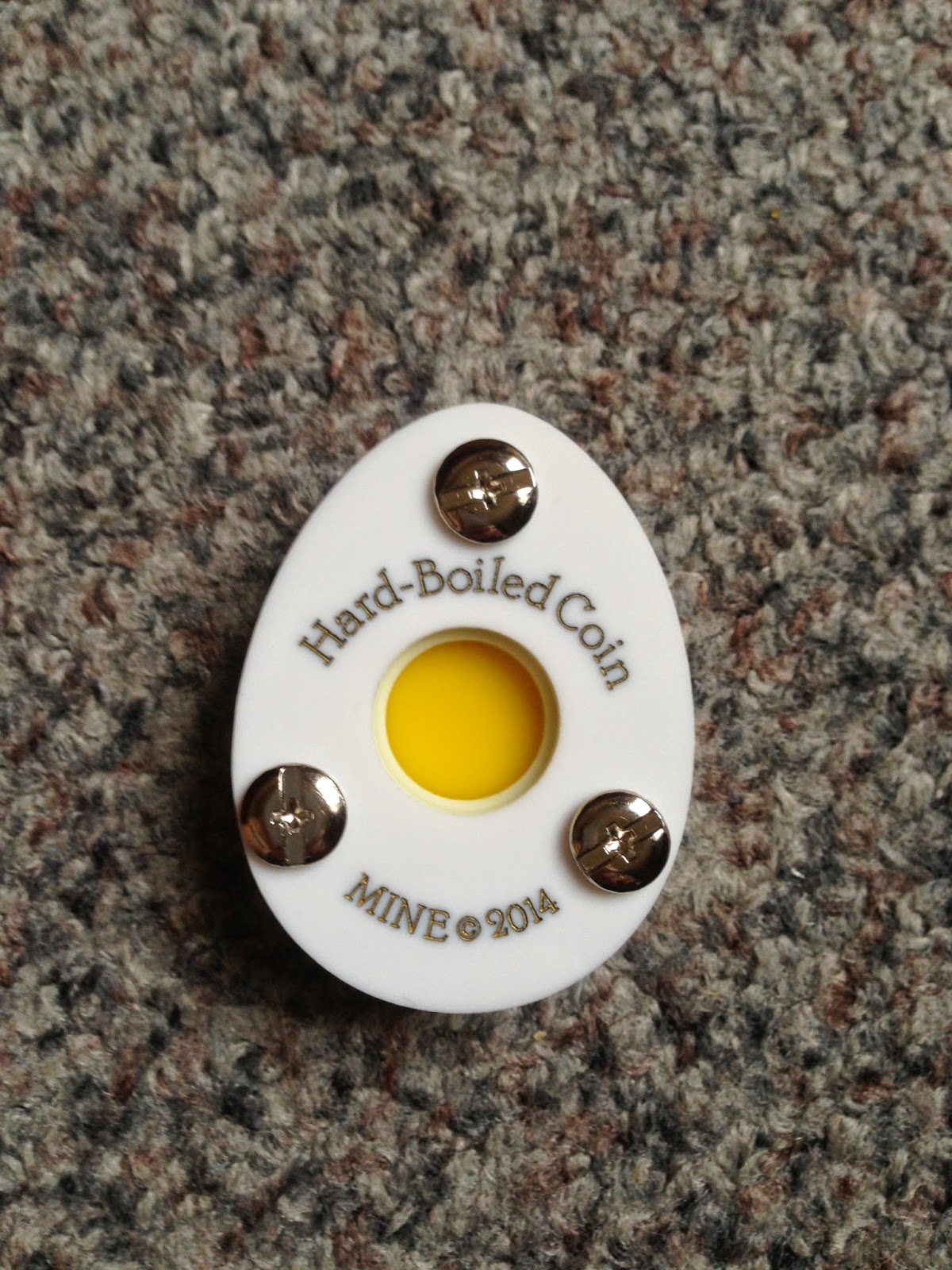 The color is the puzzle can remind you the original color of an egg, as well as the shape of the puzzle. 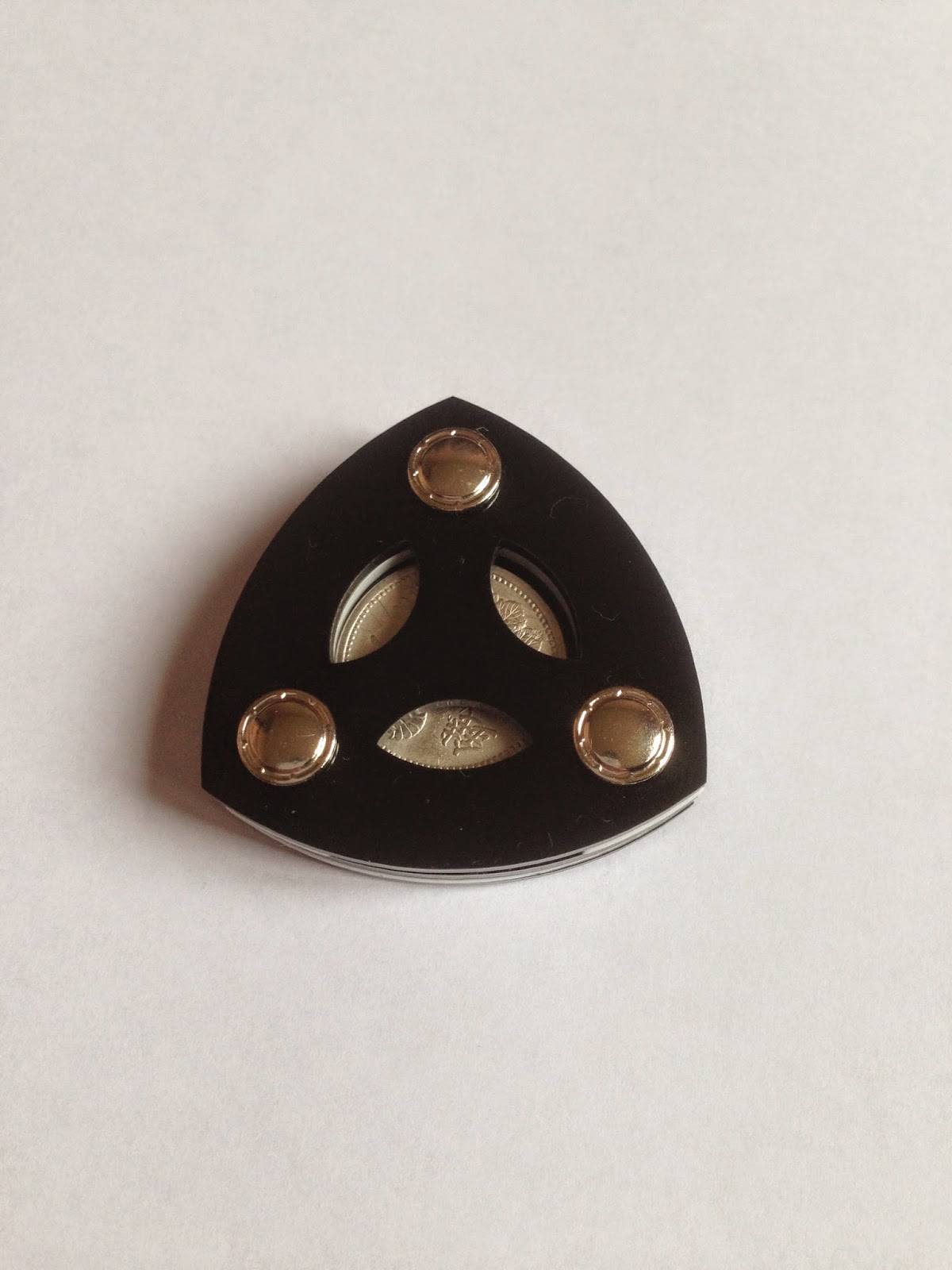 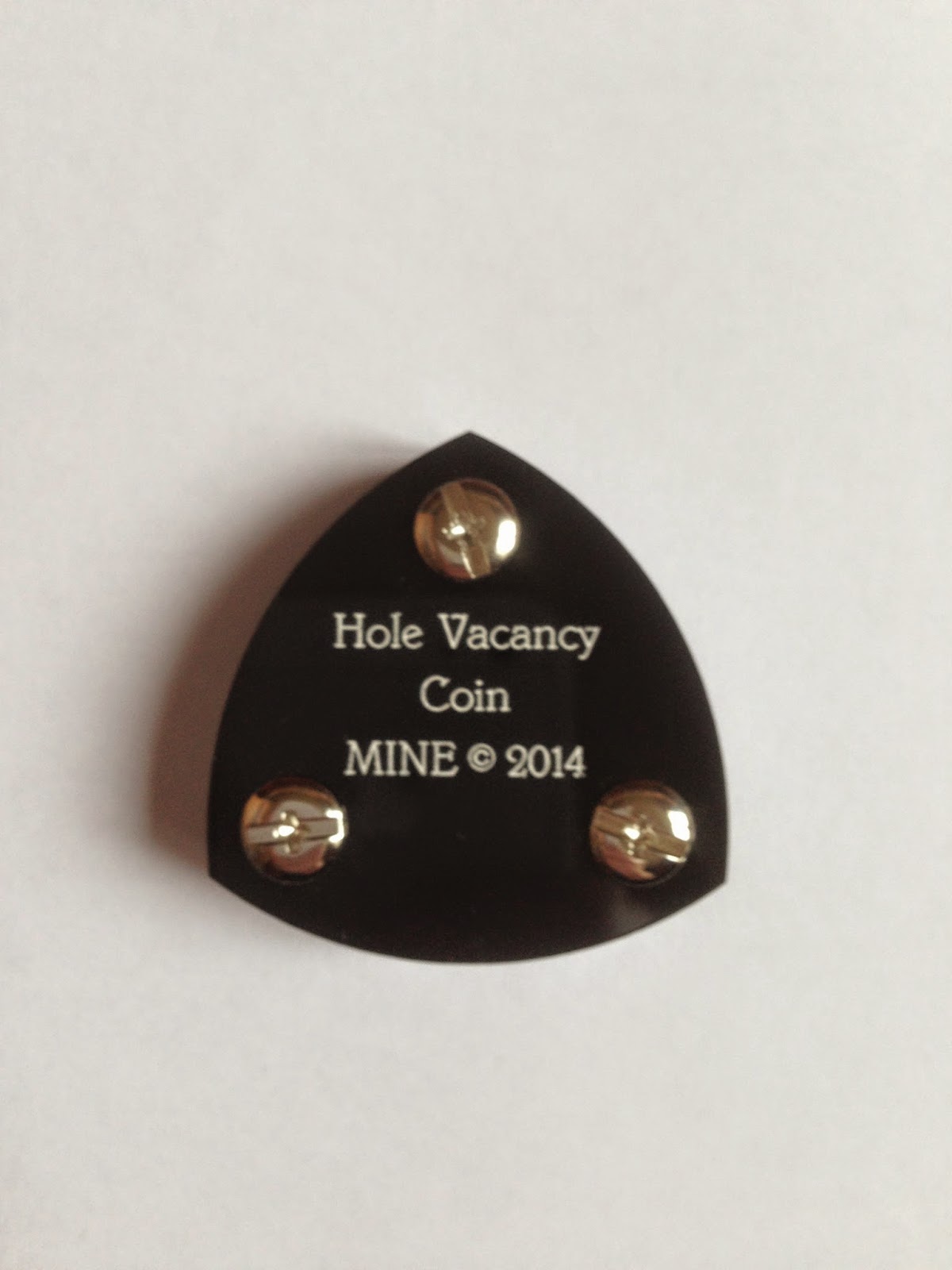 The coin is not blocked the same way in both puzzles even if the mechanism is pretty much the same kind. You immediately know what you have to do but the trick is so well hidden that you may have some difficulties to solve the puzzles. At least I had. 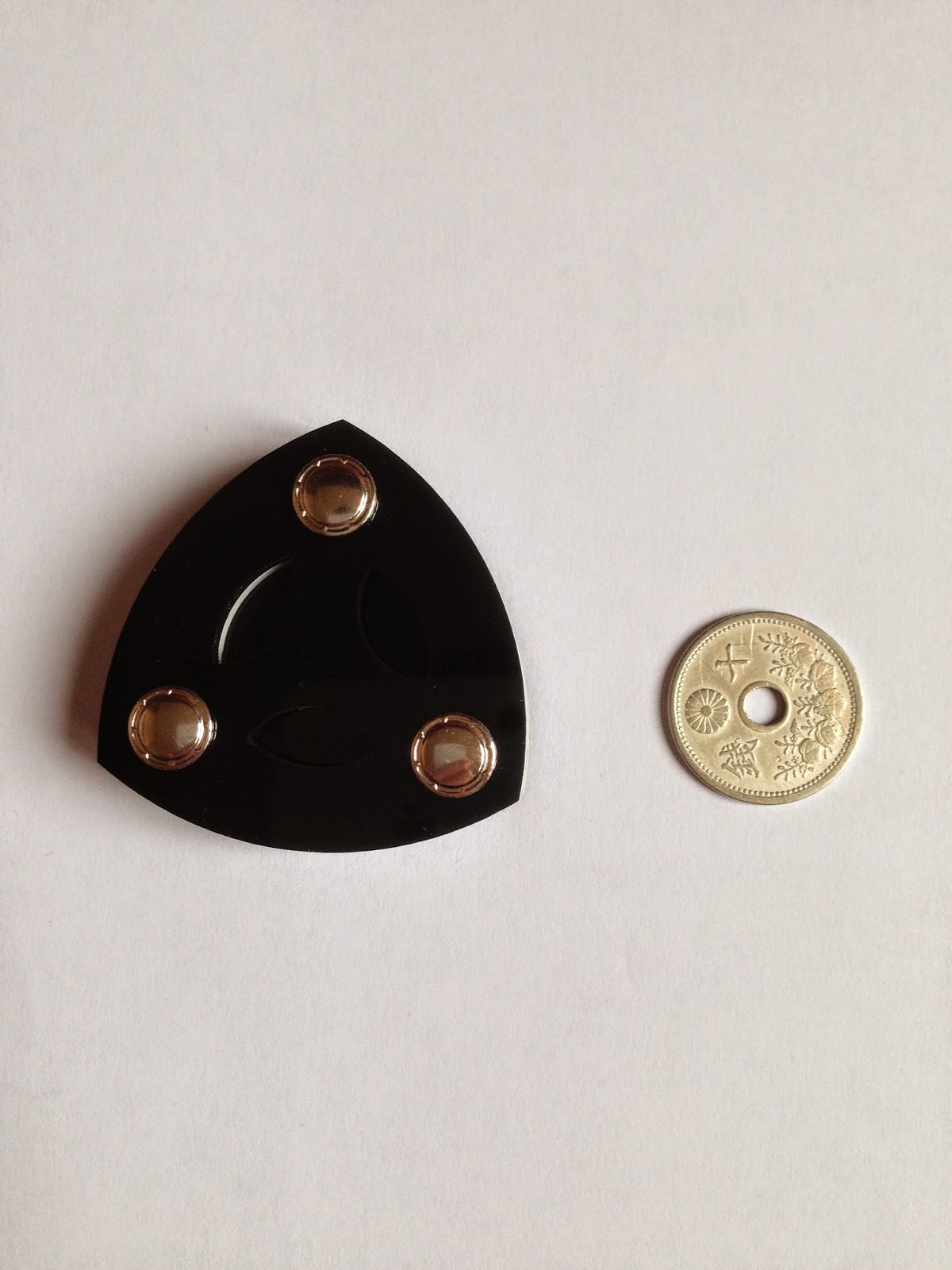 Mineyuki designed other same kind of puzzles, but they seem to be very rare.
I like these puzzles, they are nice and I like the way they are solved. However, the solving process is somewhat similar...and for the Hole Vacancy Coin, when I "reassemble" the puzzle it jams a little bit...
Cu-Japan sold some of them. Perhaps you should ask them if they still have some on stock.

Here is one of the most beautiful puzzles (or the most beautiful I think) from Robrecht Louage, a Belgium puzzle designer. The name of the puzzle fits perfectly with the design, no doubt about that. The puzzle is very nice and some part of the body of the insect (here, the antennas) are useful to solve the puzzle. Robrecht has also designed a same kind of puzzle called Larva which is, in a way, the little brother of this puzzle :) 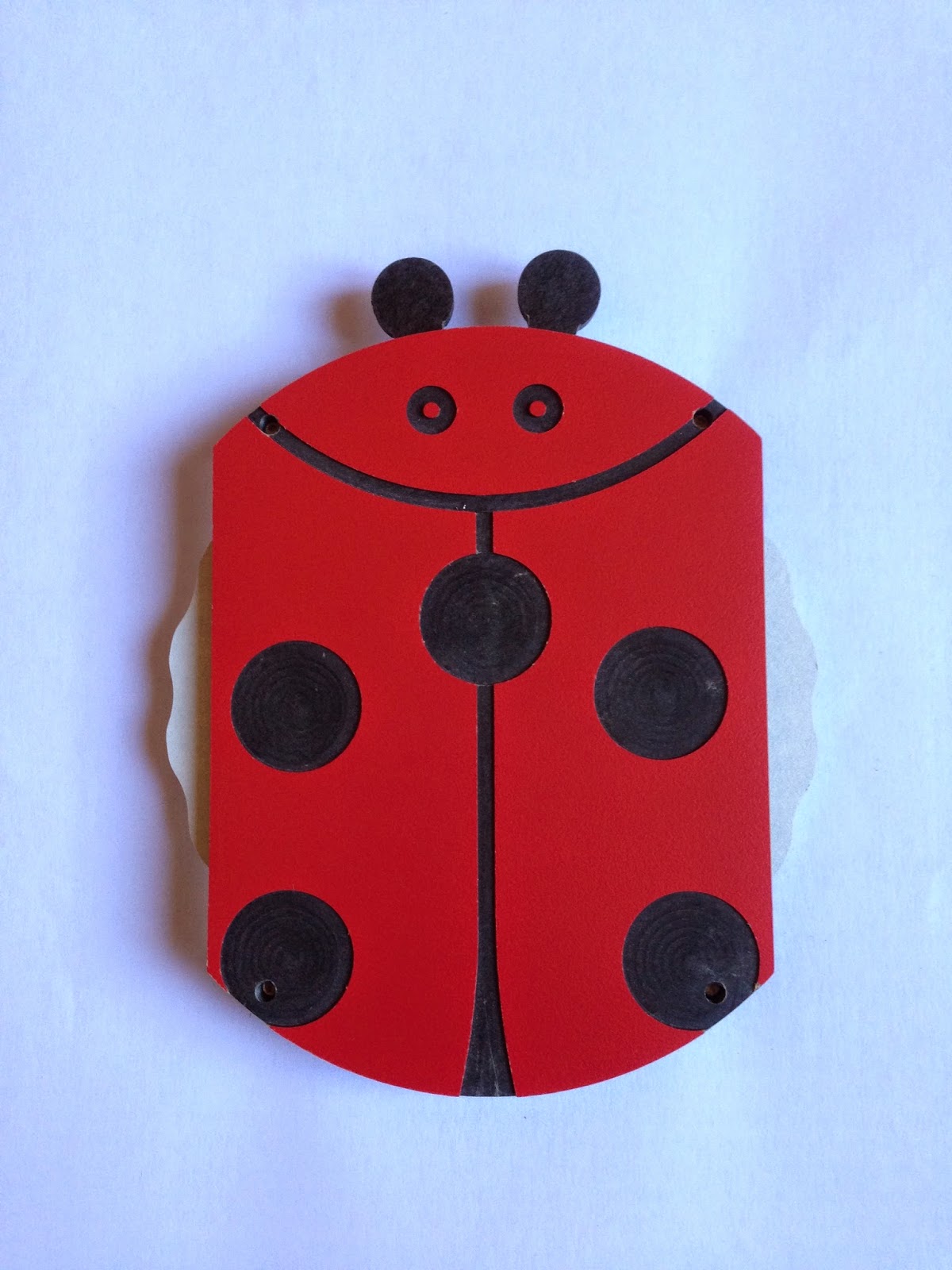 Like usually with Robrecht's puzzles, the goal is to free the euro coin. And Robrecht's puzzles are the only ones with which you earn money when you solve them! (ok, I know, you will say that you have to spend some money before to get it...^^ but still) 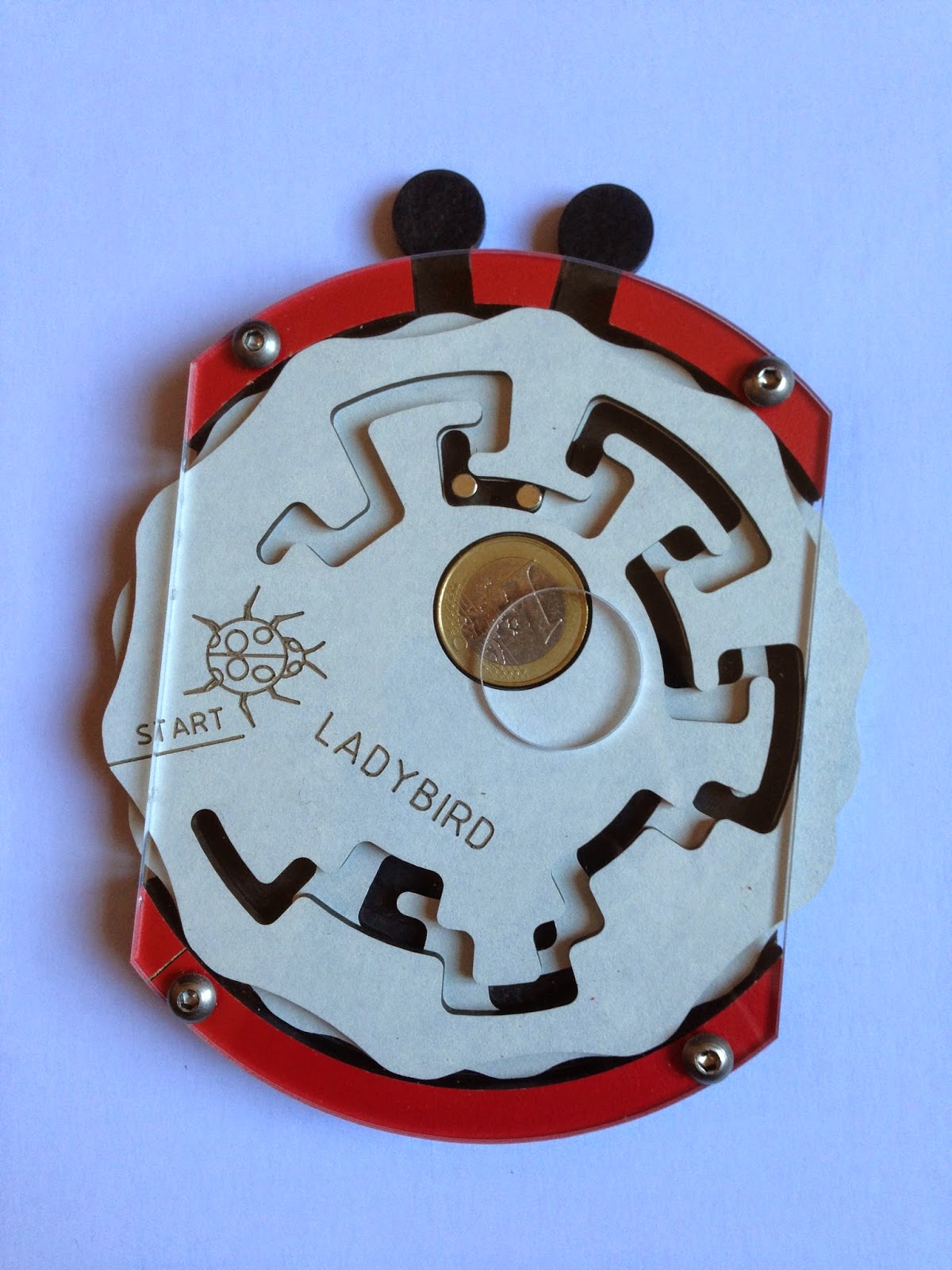 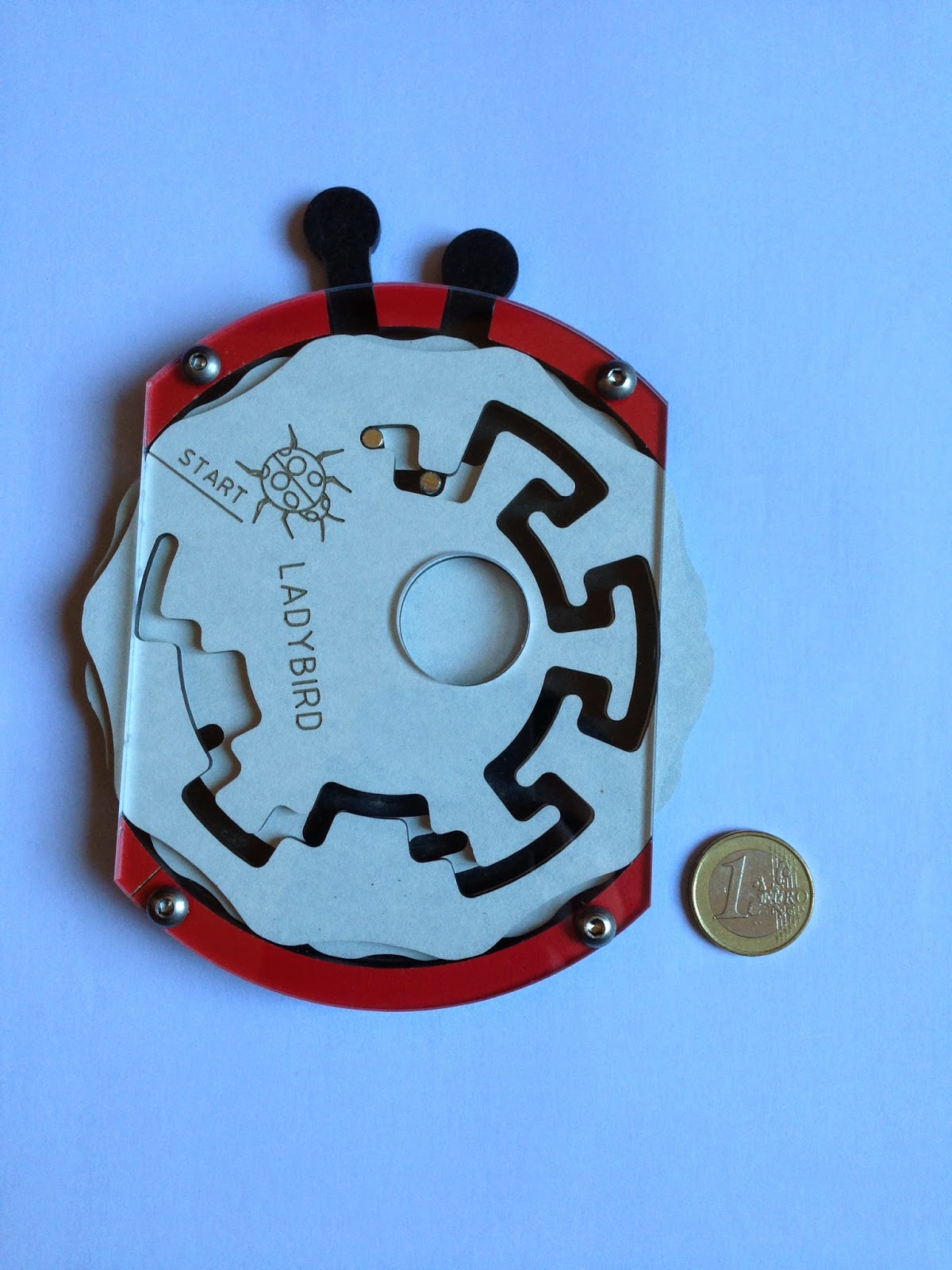 To do that, you need to pull and push the antennas while rotating the 2 disks that are under the acrylic.
When you look at the puzzle, you may think that you are very close to the solution because the euro coin is very close to the hole. Don't be fooled by that. You will have to make a long way before having solved the puzzle!
I find this puzzle very good to play with. It is very well thought.
However, I would have expected to be a little bit more difficult (even if there is a twist at some point of your road) because it's pretty straight forward. But don't worry, that does not provide you from having fun with this ladybird :)

Look the picture below, this is the "real" starting point: the line with the word "START" has to be aligned with the small line on the red part (close to the screw) of the puzzle.

I did not pay attention to that at the beginning and I thought that the starting point was when the metal dots were on the very left of the maze. But this is not correct! And when you align both lines (like above), the metal dots are not on the extreme left of the maze, this is normal.
I wonder how a solution of this puzzle could be written...It may be too difficult, and this may be why there is no solution with this puzzle. But you won't need it, anyway ;-)

To conclude, if you like the other Robrecht's puzzles, you won't be disapointed by the quality and the puzzling aspect. I really like it and I am sure you will like it too.
You can buy it by contacting Robrecht. If you want his email, don't hesitate to drop me an email.