Guess what, Pelikan made it again! Well this is a preview because they have not officially released the puzzle. But then it gives you a tast of what to expect. And there will be 2 Osanori's packing puzzles: Belt Cube 3 and W-Windows.

I will speak about Belt Cube 3 as this is the only one of these 2 I have solved so far.

It's composed of a frame and 3 pieces like many Osanori's packing, but this time it gave me hard time to solve it!! 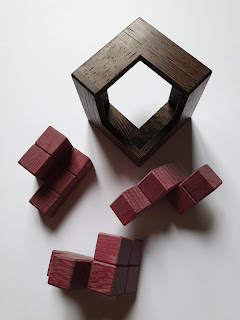 My usual technique is to make the shape outside of the box and then trying to mimic it inside. But due to the shape of pieces if was pretty hard to do so. Because first it's not that easy to keep in mind all the restrictions of the box, especially when this time you have 2 big openings! And moreover some pieces could be put pretty stable inside the box but totally unstable outside...

At one point I thought: I got it. I even thought I found a devilish solution implying rotations. This is not a secret (as you can find this information online): this puzzle does not require any rotations. But the "solution" with the rotation was pretty satisfaying except that....the past piece was impossible to pack and packing it with another was resulting in a missing cube, so the puzzles was not 100% solved!
Still, I was happy to see we could still perform a rotation inside :)

I needed to think again on another possibility and finally I ended up finding a pretty interesting "structure". So the difficult part started. I tried to perform the moves outside of the box but it's not that easy as you have to remember all the moves....and the first piece is removed after 10 moves!!! When I say "not that easy" I mean it !! 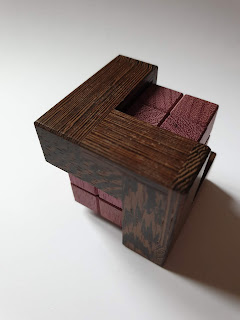 I still sorted that out and managed to put the first 2 pieces inside the box and then making 10 other moves and the puzzle was solved!
At the beginning when I saw the cage I though the structure inside would not stand well. But I can tell you that I was wrong! It cannot crumble by itself, it's very stable.

This is the 4th Osanori's packing puzzle I have tried so far and in my opinion this is the most challenging. But I may change my mind after playing with W-Windows :)
In my opinion, this is a very good puzzle. Not that easy, pretty challenging, but not overly frustrating.
I definitely advise it !!

It's not clear with the picture but there is a great wood contrast between the pieces and the frame. Pelikan will even offer 2 choices of wood color for each of these 2 packing puzzles.

They will be found HERE. I advise to check out the website often if you don't want to miss them as they have a lot of success and I don't think there will be stock left soon after the release....


EDIT: Pelikan has released the 2 packing puzzles by Osanori. You should be fast to get them. I solved W-window and I was right, it's even harder than belt cube 3. A challenge that is very satisfaying. I will review it later but I advised to get it as well while you can!! 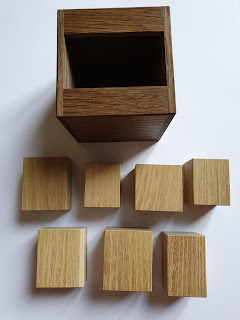