A pretty old puzzle designed by Doug Haigh and crafted by Bits&Pieces which goal is to get the diamond and free the metal ring. 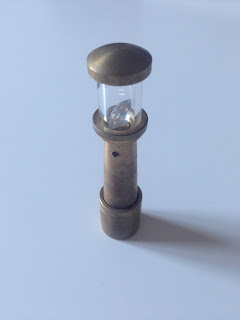 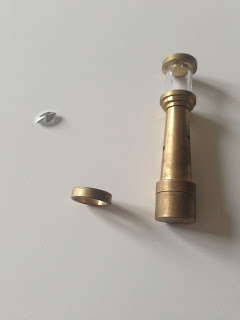 The diamond can be obtained by removing the metal top above the plexi part, but this is not the intended way to do that.

This is a pretty small puzzle but with a nice sequence of steps. I like when many things are hidden in small puzzles. That means you don't need to have super big puzzles in order to have a sequencial discovery puzzle! :-)

While not extremmely difficult, it's still a nice challenge, especially for beginners. But even a seasoned puzzler will find it nice and would need it in its collection.

I am wondering if this puzzle has ever been made by a famous craftman or only by Bits&Pieces. Any clue?

A nice puzzle designed and made by Stephen Chin, this Newton's egg obeys to the 3rd Newton's law. 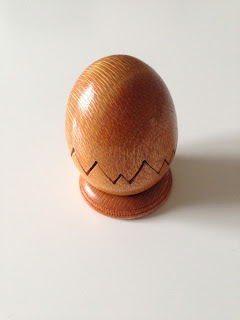 The wood choosen is very nice and stand up on a nice display. Well for this kind of puzzles, you'd better have a display stand :-)
The cuts on the eggs are nicely made and look "real". 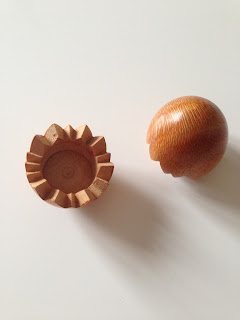 Like all or almost all Chin's puzzles, this one is not super difficult but will still puzzle you a bit of time. And like all his puzzles, the mechanism is not super complicated, but very efficient and well designed!

So far, I have not seen such a "mechanism" implemented in a puzzle and I liked a lot the way of solving it. And it's easy to repeat!

This is an egg(cellent) puzzle :)

Aroma is a puzzle designed and exchanged by Iwahiro for IPP 30 in Japan. It consist of a black plastic cage and 3 pieces that need to be put inside.
Note that the shape of the pieces is pretty unusual.

So only 3 pieces, easy? Well yes and no. Yes because you will soon realize how to do, but no because you cannot see if you're doing the proper alignment of the pieces. 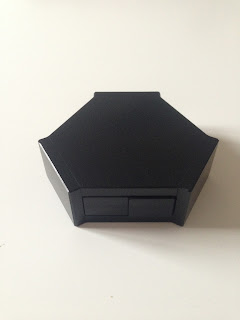 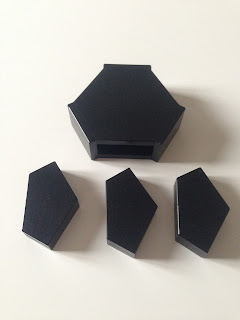 As many Iwahiro's puzzle, co-motion will be used!

My technique was to assemble the pieces outside the cage and see how they can be put (but "expanding" them) inside. The fit is perfect, you need precision to solve it!
You just need to understand who the pieces interact. Needless to say that it's very easy to free the pieces outside of the cage. The real challenge is to put them inside again.

In my opinion this is a nice puzzle because it's not big and can be carried out easily. It's for anybody and due to its material it can be played by even a non puzzler as he won't damage it :-)

And regarding the difficulty I would say medium because I am sure that you won't automatically manage to solve it and each time it will take you a bit of time to do it again.

When nice puzzles are sold out too fast and are not available anymore at the webshop of the seller, don't cry!
Just try to find out other ways to get it, for example in resellers' webshops. I mentioned in a previous post a nice webshop: art of play. And I found this puzzle from them!

This seemingly easy (you're going to be fooled!) puzzle was designed by Andrey Ustjuzhanin crafted and released by Eric Fuller on June 2017.

The puzzle is only composed of 3 pieces, well the cage and 2 complicated pieces. The goal is to use the 2 moving pieces to repair the cube, a cube with a lot of holes by the way.
The puzzle is shipped assembled, maybe because it's safe during the shipping.

I can only advise you to take pictures of the puzzle while you're solving it. It will surely help you if you're blocked. Obviously repairing the cube is way more difficult as you have several possibilities to put the pieces. Oh did I mention there was a small rotation?.... :-) 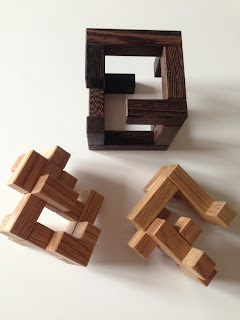 It's not because a puzzle does not have a lot of pieces that it's easy to solve. Proof with this one!

I can only advise you to buy it from art of play while it's still available. And I can recommand to buy wunder bar puzzle from them as well. This is a very nice puzzle! You won't regret your purchase. 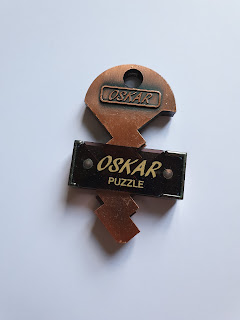