A new puzzle maker and a new metal puzzle? YES and YES !!!

The TOAR Designs Coordinate Burr Puzzle is a co-motion metal puzzle designed and made by Neal Swinney. To be a bit more accurate, the name of the designer is not known but Neal modified the outter shape, manufactured the puzzle design and the finish of it.
The puzzle consists of 6 anodized metal pieces that need to be assembled together. The puzzle is not big and can be taken with you on a travel trip. Usually hand-made puzzles are not big because of the manufacturing costs that are usually pretty high. But who cares about the size as long as the puzzle looks nice and has a beautiful finish, which is the case with this puzzle! 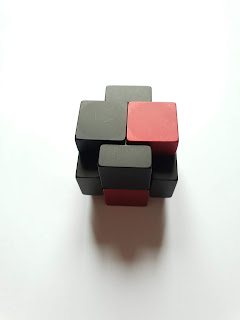 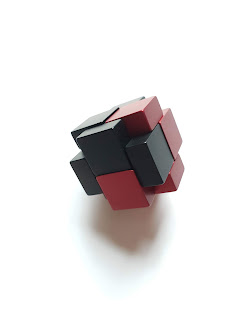 The assembled structure is solid, but you should not have too many difficulties to takes the pieces apart. When you disassemble the puzzle you should get something like that: 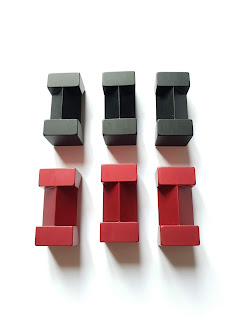 Yes, they're all identical! So now how to proceed? Wel l it's not that obvious because the structure is not so stable until you put the last piece. So it's a bit of dexterity but definitely you need to think before :)

I tried something that usually works with co-motion puzzle (I'm not telling you to avoid spoiling) but it did not work....pitty because it was not a bad idea :-(
But at some point I thought there was another way to do so and it proved I was right. The method to solve it is less complicated than the method I thought I found, but nevertheless it's a method that works and...it is the solution!

The puzzle is shipped assembled but if you want to change the color configuration then you can because all the pieces are the same. So you can experiment which look you prefer the most. 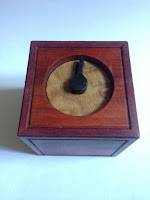