One of (if not the) the biggest popplocks, the easiest one and the one that many did not like, let me introduce you the popplock T7 and explain some things about it. 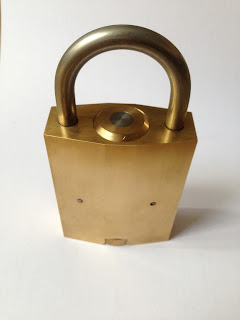 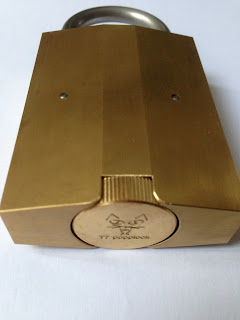 You see, a big lock! Don't be afraid this is easy!!

You should solve it under 10 seconds which, regarding the price, does not seem to be worth the money spent. Notice that I say "seem" and I don't say "is not worth".

There is a clear close feature to the revomaze puzzles: this popplock has like a maze inside the core and you need to solve it to open the lock. So it's not something new because the revomaze puzzles already existed before the release of this puzzle. First disapointing thing. Now the revomazes are more difficult and will puzzle you for much longer time as one wrong move and you start from the beginning. For this puzzle you will not start from the beginning. I don't feel this is a bad point, but that may be a second disappointing thing for hardcore puzzlers :-)

So what's good with that puzzle?
Well, first you can modify the inside maze by putting pins here and there, so you can create you own maze and try to solve it. I love this feature, because it's not common that you can modify a puzzle (and thus its difficulty), let me know if you can have the same nice feature in other puzzle, because I don't have any example right now.
Now the second good thing is that there is like a "safety" mechanism that allows you to be able to solve the T7 (free the core) if you made either a too difficult maze or an impossible one!! I love this feature, this is not a new one because you can find in many Tom Lensch puzzles, for example, such mechanism that allows you to start again the puzzle. 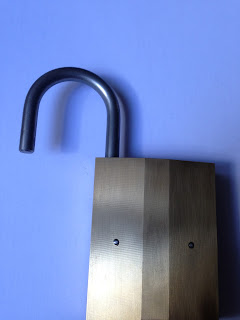 A quick warning: as you will have to push and pull the core, take care with your fingers.
With some popplocks you need an extra care when playing with them as you could hurt yourself because of moving parts: T3, T5, T7.

So despite its easy difficulty (maybe Rainer should have put a more difficult maze when shipping the puzzle?...), this puzzle has some really nice features, and I am sure you will try to solve it several times. Well, and if you intend to collect all popplocks or if you're a trick lock lover, then no doubt you will try to get it :-) 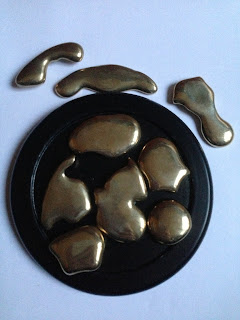